The first leg of our much anticipated vacation was a gong show.   Three flights, three airports, and 9.5 hours in layover time.   We spent 5.5 hours of that time in the Frankfurt airport.   If you’ve ever been there, you may recall that it takes a train, a bus, and three sleepy donkeys to get from one terminal to another.   Needless to say, we missed that connection.   Finally, finally, we boarded the flight for the last leg of our epic journey. 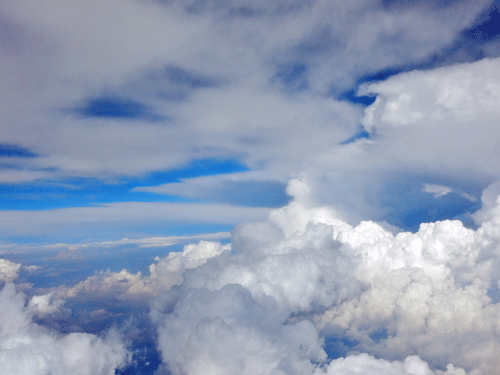 And then we landed in Venice.

I was looking forward to visiting Venice, but thought of it as sort of pit stop on our way to an 11-day cruise.   We were sure it would be a lovely city, but it was really a place to rest up for our ‘real’ holiday.   I knew we were wrong before the plane had even taxied up to the gate.   The landing strip and runway were beautiful.   Marco Polo airport rocked!  Ok, maybe not the airport itself, certainly not the airport itself, but the land on which it stood was awesome! 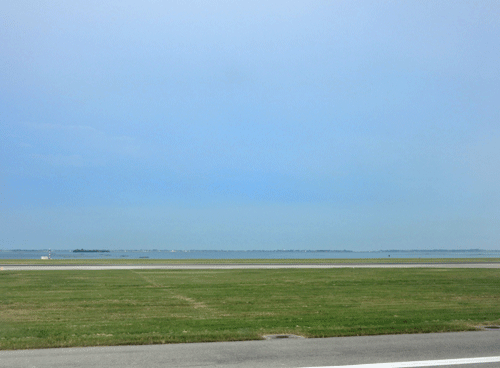 Our luggage arrived unscathed, and we were truly delighted.   My suitcase went AWOL for the first five days of our honeymoon, so I’m always beside myself with joy when our luggage shows up.   All of it.   In the right place.   At the right time.   Particularly when there has been a delay somewhere along the line.   And all in one piece, of course, is a bonus.

There was a lovely man, holding a sign with our name on it, waiting for us at the airport.   He was charming and entertaining, and told us all about the regions through which we were driving.   And although he kept explaining that his English was dreadful, we actually understood at least 85% of his conversation.   The other 15%?   Just smile and nod… smile and nod.

He dropped us off at a water taxi station, which was just a riot of color and sound.  It was a hive of activity; suitcases everywhere, people coming and going, and most of them seeming to know what they were doing.  I’m not sure how we picked our taxi, or how it picked us, but soon we were clambering aboard a surprisingly long boat.
We headed to the back end of the taxi where we could stand up and gawk around.  And gawk we did, as Venice began to unfold itself right before our very eyes. 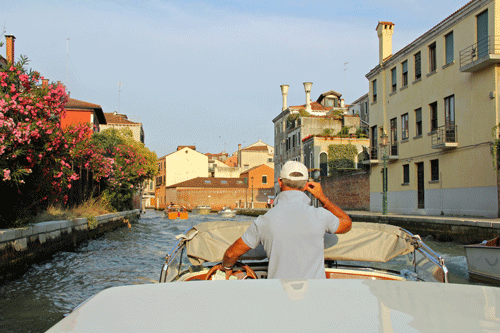 The City of Love showed itself in rich colors, amazing textures, and three awesome dimensions.  It was about 6:00 pm by the time we were on the canal, and long shadows were starting to form across the water.  But that didn’t stop the snap-happy couple from Canada.  We took pictures of the water, the sky, walls, windows, doors, crumbling stucco and each other.  Everything was wonderful.  Even the decay near the waterline was beautiful.The sights, sounds and activity on the canal washed over me like a wave.  Over and over again, singing “This is Venice.  This IS The City of Love!” 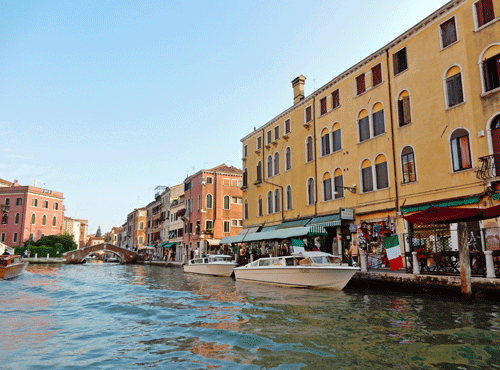 And as silly as it might sound, I was absolutely overwhelmed by the splendor of the city.  Dazzled.  Blown away.  Completely and utterly smitten.  We motored past hotels, gondolas, churches, beautiful homes and hundreds and hundres of tourists enjoying what the city has to offer.  We saw restaurants, gardens, water taxi stations, bridges by the dozen, squares large and small and all filled with said tourists, other water taxis, HUGE yachts and the entrances to ever smaller canals.  It was everything I could have ever imagined, and so, so much more.  We took dozens and dozens of pictures.  We called to each other from opposite sides of the boat.  “Did you see that?  How beautiful is this?  Oh my God, look over there!  ”We were both completely captivated.  Venice had won us over in a heartbeat. 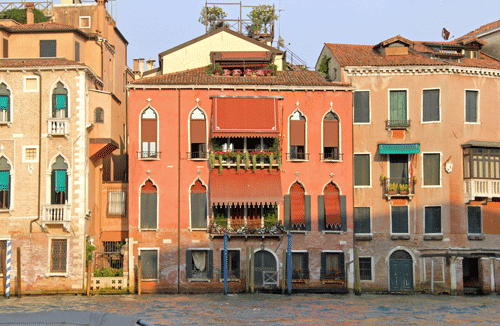 A Riot of Colors and Shadows

Eventually, we were dropped off at the front door of our hotel.  Too soon, it seemed, as the journey there was beyond exciting.  We were booked in to a lovely little place called Hotel Duodo Palace.  Opulent lobby, delicious continental breakfasts, and lovely rooms.  The bathroom was at least as big as the bedroom, all in marble, and squeaky clean.  I was most impressed with the beautiful rose colored fabric covering the bedroom walls; it was such a gentle color, slightly patterned and had a hint of a sheen.  The rooms were small by North American standards, but very European.  The bed was comfortable and the water hot and plentiful.

The night manager was another fabulous character.  Funny, self-deprecating, and full of information.  He pulled out a map to show us where we were and where we wanted to go.  He told us to dine at the best restaurant in the city, explained which one that was, and exactly where to find it.  Sadly, he was a bit mistaken on that one, but I digress.  He showed us that Venice actually looks like a fish, and we were in its belly, right above the bottom fin.  He explained our location in relation to the rest of the area, and implored us to enjoy his city.

And so, after changing shoes and freshening up, we left the hotel to explore.

Out and About On Foot

It was about a ten minute walk to the legendary Piazza San Marco, which was just teaming with people, pigeons and the occasional sea gull.  It truly was a visual banquet, and we really weren’t quite certain where to begin.  There were shops to explore all around the perimiter of the square, architecture and buildings to admire, and a city vibe in which to revel.  St. Mark’s Basilica was wildly beautiful, even as it was being swallowed up by lenthening shadows.  The bell tower had a gentle list, as if it was leaning over to listen to mass.  Come to find out, most of the bell towers in Venice have a distinct lean, in one direction or another. 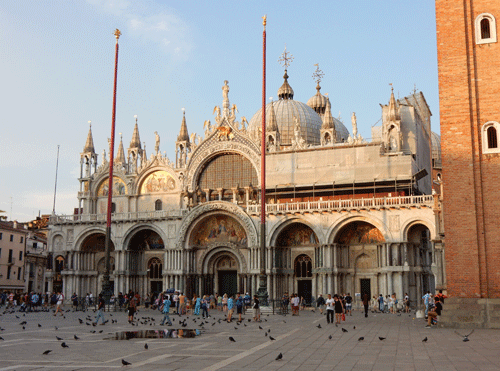 Making our way across the crowded square, we were stopped in our tracks.  Strains of Led Zeppelin’s “Stairway to Heaven” were weaving in and out of the massive crowd. We stood, mesmerized, trying to locate the source of this wonderful, last dance of the night anthem.  It was a string quartet, playing in front of a lovely little restaurant at the foot of the bell tower.  Ok, it wasn’t really a string quartet as there was a wind instrument involved.  And possibly a piano.  But you get my drift.  Dozens and dozens of people stood, transfixed, listening to those familiar notes wend their way through the air.  It brought tears to my eyes.  The music was haunting, stirring and simply wonderful. 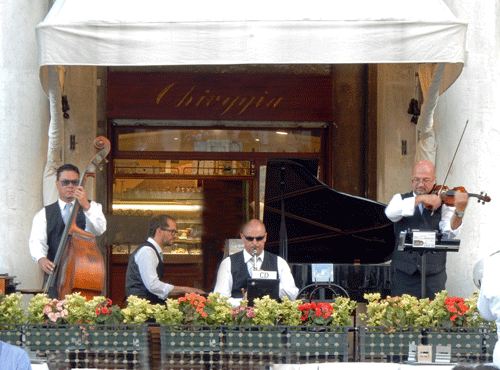 My husband wanted to hit the Campanile di San Marco, as we wouldn’t have time to visit there the next day.  So, after listening to such a haunting rendition of an old classic, and wandering around the square for a little while longer, we then stood in a surprisingly short line to take the elevator to the top of the bell tower.  There was just over an hour until sunset, and most of the tourists had wandered off to take in other parts of the city.  So, up we went, hot and sticky and crowded in to a small elevator with people from all over the planet.  We ascended 98 feet above the city, stepped out on to the observaton deck, and we could see it all!

Now that is how Venice should be seen.  Full tilt, 360°, and under a setting sun.  We walked from window to window, getting blisters on our fingers from taking picture after picture.  We saw all of the city of Venice, its intricate system of canals, the waterfront, the islands of Murano, Burano, Giudecca, Lido and San Giorgio, the lagoon, the Doge’s Palace and the Alps.  The Alps were in the far distance, but we saw them just the same.  It didn’t matter in which direction we looked, it was all, in a word, spectacular! 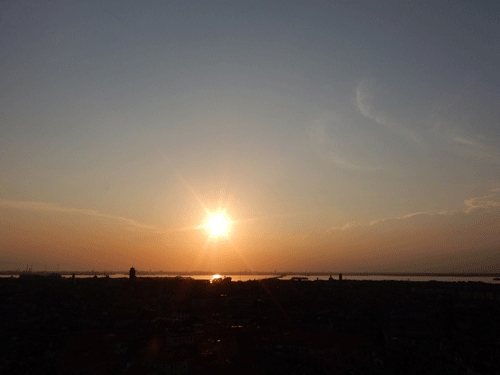 After coming back down the tower, we took a few more spins around the piazza.  I noticed a bit of bubbling in the middle of the square, and we paused to discuss what that might be.  My husband thought perhaps a fountain starting to do its thing.  I thought perhaps the water starting to pour in to the square.  And then, inexorably, the water began to bubble up all over the square.  We saw it rush in under a door on the edge of the square.  Inch by inch it percolated up, all with apparent determination.  It was a sight to behold, and I can only imagine how distressing it must be when it continues to rise until the square is several feet deep in sea water.  This, however, was just a little tidal rise, and the photo op to end all photo ops.  Magic, pure and simple. 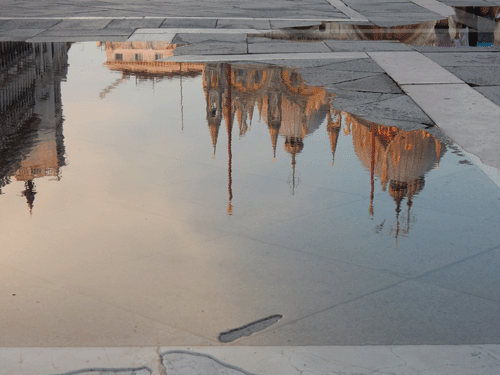 Reflections in a Rising Tide

We had finally seen our fill, and left the busy crowds behind.  Wandering through the narrow and winding streets to make our way back to the hotel, we stopped for dinner in a little hidey hole of a restaurant.  I had the best Caprese salad I’ve ever tasted; the tomatoes were sweet, the boccocini cheese soft and mild, and the balsamic vinegar to die for.  Now, it might have been because we were tired, or it might have been because we were starving, but that was one delicious dinner.  In one beautiful city.  On one magical night.

We caught a fashion photo shoot in the square just outside of the Teatro La Fenice.  The Venice Opera House stands in one of the oldest squares in the city.  It is much smaller than expected, even though it can seat over one thousand people.  The opera house has burned to the ground on three seperate occasions, the last one being under very suspicious circumstances.  Arson, in fact, if you can imagine!  Even so, the Teatro continues to stand tall and has a very stately air, as is befitting its reputation.

Have I mentioned that it was about a thousand degrees and ridiculously humid?  No?  Really?!?  Well, it was.  They’d just had a downpour and the city’s humidity was off the charts.  And here was this gorgeous girl, all done up from stem to stern, modelling something very haute couture.  She was wearing pounds and pounds of baby blue chiffon; layers and layers of the diaphanous.  In the heat.  And the debilitating humidity.  And seemingly without a hair out of place.  Matching tiara and all!  She was pretty impressive. 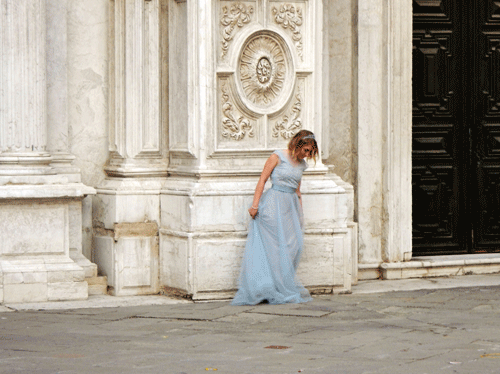 And so, as we staggered through the narrow streets and alleys to make our way back to our air conditioned hotel room, we were replete.  Our appetites had been quenched, our eyes had been delighted, and our souls were still singing the praises of the city.  As we meandered (and I do mean meandered), we stayed in constant contact with our old friend, Google maps.  It had been easy enough to follow the crowds to St. Mark’s Square, but it was quite another story to find the way back to our little nest.  Our feet were beyond tired and starting to howl, and we were getting a little giddy with fatigue.  Me in particular, apparently.  And lost.  We cannot forget to mention lost.  We’d been up, completely without sleep, for over 29 hours.  Like, in a row.  Our tired had tired.

Still and all, we were well beyond excited to see what the next day might bring.  What more the city might reveal.  We were exhilarated…  exhausted…  zzzzzz… 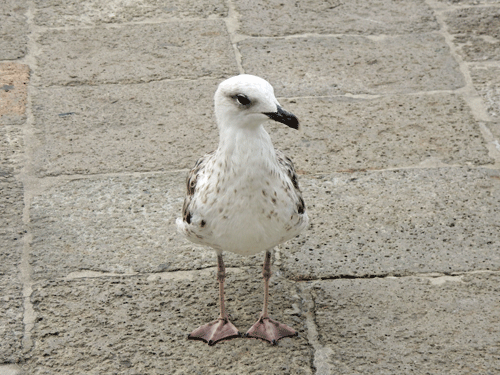 Sweet Dreams All Around