“That which we call a rose by any other name would smell as sweet.”

Shakespeare may have been barking up the right tree, and for sure, Juliet always says it with great feeling.   However, I suspect that neither of them were ever charged with naming a website.  And therein lies the rub.  Ok, I realize we have just segued from Romeo and Juliet to Hamlet, but I’m sure you get my drift.  Three years ago my boyfriend (which always sounds so lame when you are in your 50’s) and I vacationed in Hawaii.  It was mid-November and we were both in need of a break. He because he has one of those pressure cooker jobs and me because I’d just left the rigors of 18 years of single parenting and all of the drama and juggling that goes along with that gig.  We spent a few days in Waikiki, which I hadn’t visited since I was a teenager.  Staying in a hotel across the street from the International Market Place, we were right in the middle of the action.  Which, at that time, was mostly OPEC 2011, which was going on all around us. 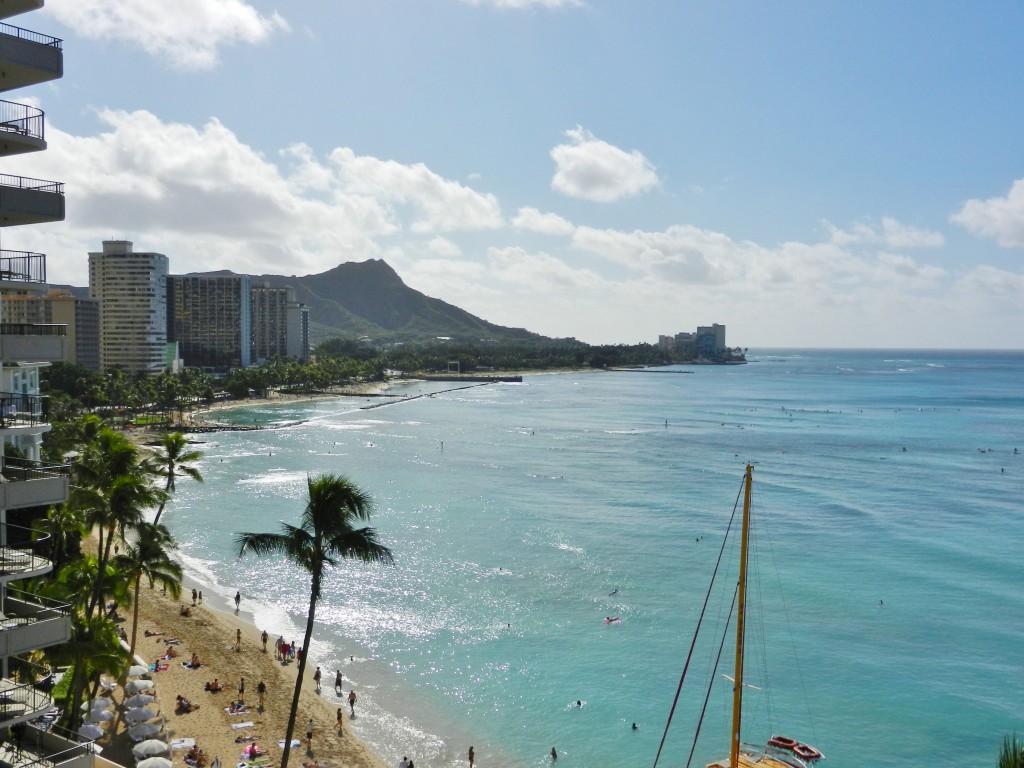 A room with a view

We spent the next ten days in Maui.  I’d never visited there before, and after a day or two was worried that one of us just might die of boredom.  And then a strange thing happened.  My boyfriend began to relax.   Change.  Morph in to someone I’d never met before.  I quite liked the emerging vacation mode man by my side.  And it hit me.  Maui is not boring.  It is relaxing.  Well, except for our encounter with a shark, which we’ll have to discuss at another time.

Across from our balcony stood a huge tree which, come to find out, was a very large condominium community for thousands of birds.  Literally.  They came home to roost, every night, like clockwork.  Any hint of the sun falling from the sky and they would start to arrive.  In ones, twos, flocks, dozens and everything in between.  They would all chatter and squawk as they landed, and then, apparently, catch up on the news of the day.   Where they’d all been, what they’d all eaten, who they’d all seen.  It was a cacophony of sound.   Excited.   Maybe a little nervous.  Probably quite happy to be back ‘home’ again.  And all certainly full of moxie.   The tree would settle down and we’d think, ah…   silence at last.  And then one last bird would straggle in and it would all start back up again.  In my mind’s eye I could see them all hopping a little to the left or a little to the right to accommodate the new arrival.  Eventually, though, the tree did settle down and silence would prevail. 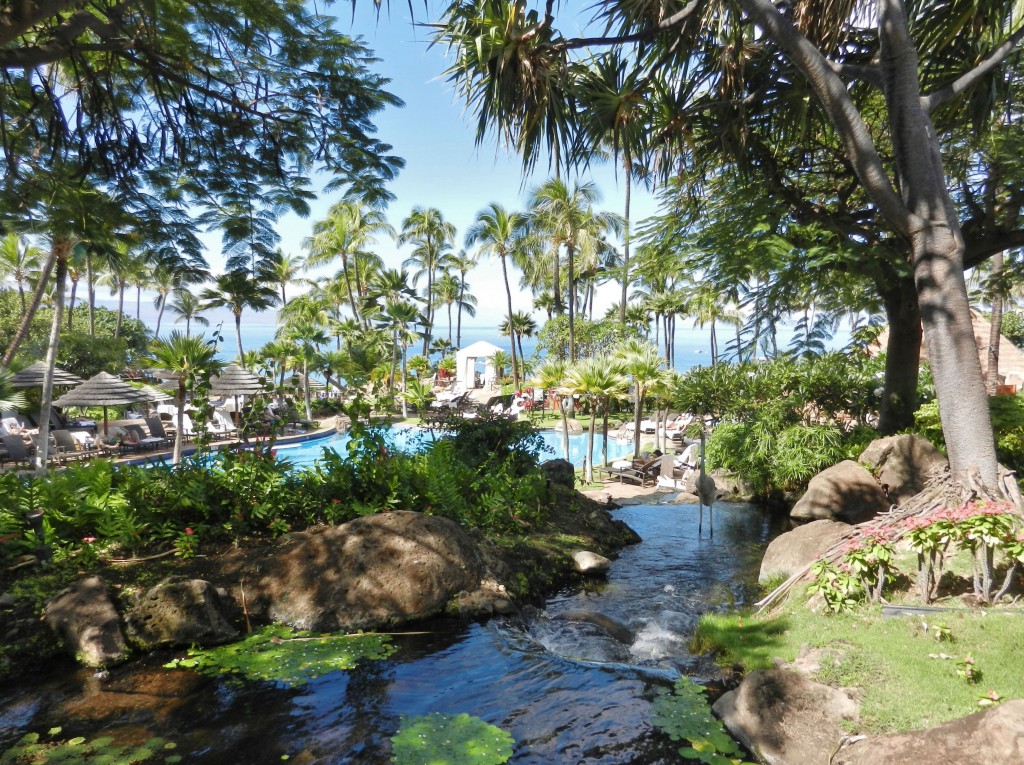 We did all sorts of amazing things on that vacation.  We snorkeled in Molokini Crater to look at brightly colored fish, turtles and yep, a stingray.  Did I mention that I can’t swim?  We parasailed high in the sky above the water in Kaanapali.  Oh, right, and I’m afraid of heights.  We drove half of the road to Hanna, during some of which my partner in crime (we’ll call him Mark) had one arm out the window in order to film this latest adventure.  Don’t know if you’ve ever been on that road, but it is not for the faint of heart.   Particularly when the driver is only half in the car.

For some reason, Mark was really set on hoofing it out into the jungle to see a waterfall.  Mercifully, my asthma was acting up and we weren’t able to hike anywhere.  Mercifully because it was a million degrees and I was quite certain he’d have had to carry me back out.  I don’t function particularly well in heat and humidity.

He was also very anxious to get to Haleakala ~ the top of which was covered in clouds.  Day after day after day.  After day.  And much to his chagrin!  Finally the clouds broke, and off we went.  Thankfully, not to see the sunrise;  you have to be on the road by 3:00 am to manage that.  Now there’s a road.  Makes the road to Hanna seem like child’s play in comparison.  It’s steep, curvy and tremendously scary.   You’d see nothing but air on one side of the car, and then nothing but air on the other.  Like really, from a physics perspective, how is that even possible?  I have every faith in Mark’s driving, but that road make my legs feel wobbly. 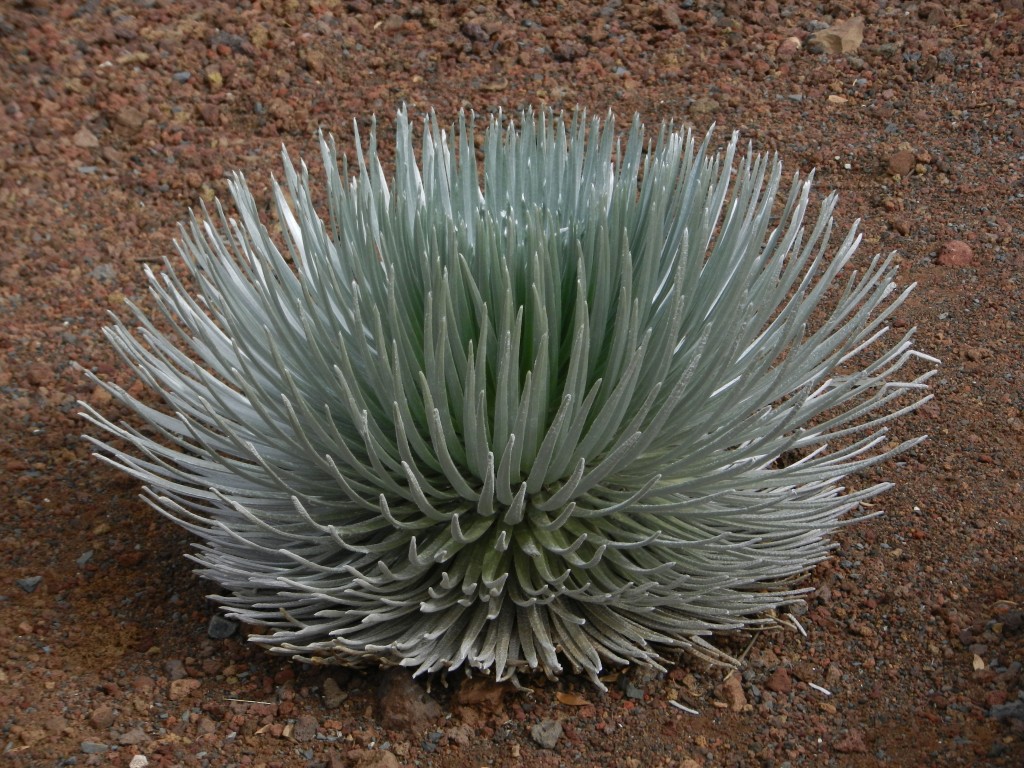 Silversword plants, an endangered species, live scattered about the observation area.  Perfectly symmetrical, they live 2,100 meters (6,900 feet) above sea level and take about 50 years to look like the one above.  And that is your botanical lesson for the day!

So to make what appears to be a very long story short, my then boyfriend got down on one knee, whipped out a beautiful ring, and asked me to marry him.  He had wanted to do so by a waterfall, which was a lovely thought, but unattainable.  Such a surprise and all tremendously exciting!  We went to the Old Lahaina Luau to celebrate, and danced the first dance with all of the other newlyweds in attendance.

Celebrating at the Old Lahaina Luau

In addition to having just left single parenthood behind (the children both flew the coop), I had also just finished an 11 year career and was looking retirement straight in the eye.  Yes, I’m actually getting close to the point of this little vignette.  I’d been making wire wrapped jewelry for years and was just embarking on the metalsmith path.   Hammers.  Flame throwers.  Pliers.  Pickle pots.  All sorts of new gizmos to master.  Or at least learn to use without burning off my eyebrows.  I had been selling my wire wrapped jewelry in a couple of local stores, and now with the new direction in jewelry making, was making more than the market could bear.  So, one fateful afternoon we were out bobbing in the ocean, and Mark (my then fiancé – which had such a nicer ring to it than boyfriend…  pun intended) suggested I look in to selling my new and exciting creations online.  What an idea!  I was so excited at the prospect of filling little bits and pieces of sterling silver, copper, brass, gold, pearls and gems with love and light and sending them out in to the world.

Later that afternoon we were sitting in the shade enjoying our afternoon Cheeky Monkeys, when we began to brainstorm names for my very new, very exciting, and at the moment, very imaginary shop.  We had a note pad and pen and nearly burned the nib off that pen as possible names filled piece after piece of paper.  And oh my, some fabulous names came out of that session.  It is possible that the Cheeky Monkeys might have helped our creativity.  I think Ocean Om was my very favorite possible name.

So, if you know anything about the internet, you likely know that it is hard to have an original thought.  Like there is almost nothing you can come up with that someone else hasn’t already thought of and appropriated.  There are also thousands and thousands of exceptionally talented artists who create and sell fabulously beautiful jewelry online.  I decided to start this new adventure on Etsy, a site I had recently learned about from my delightful stepdaughter-in-law.  We’ll call her Katie, because that, in fact, is her name.  Oh, the nomenclature of 21st century family!

Once home again I unpacked my not so little hoard of paper and tried the fabulous list of names we had created.  And would you believe, each and every one of them was taken.  I canvassed friends.   Family.   Fiancé.   Every suggestion, every idea…   no longer available.  I did come up with one I loved, but a friend suggested that people wouldn’t get it as it was a double entendre.  And, back to the drawing board. 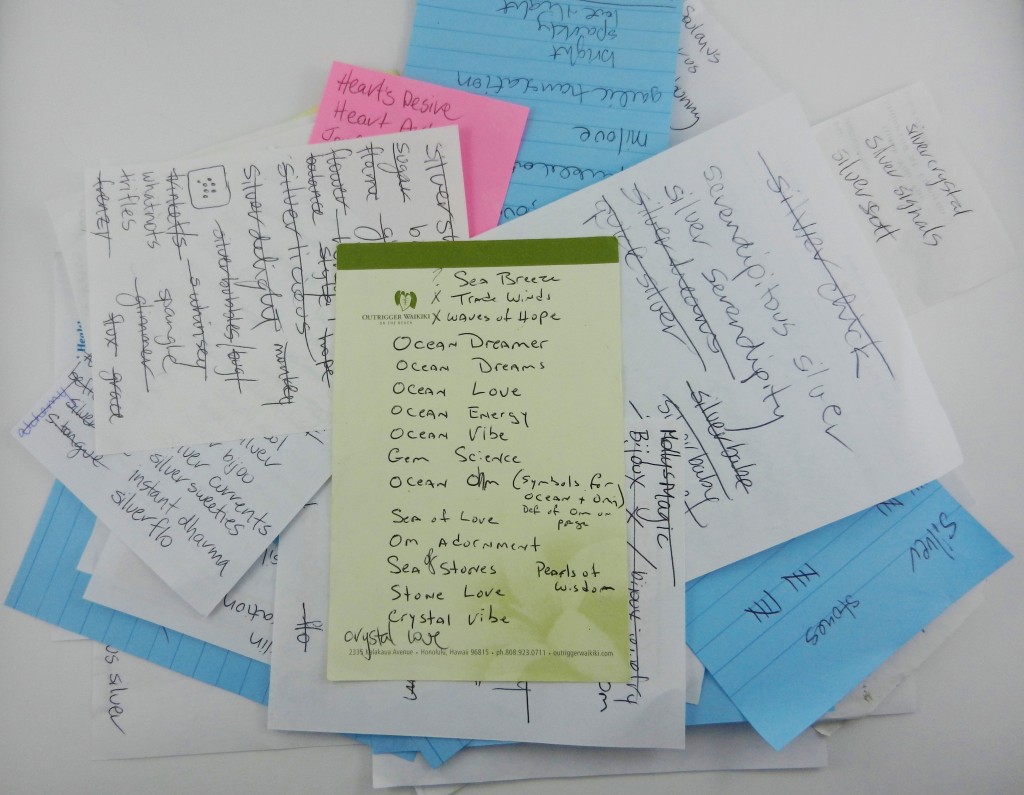 The Tip of the Iceberg

The picture above in no way represents all of the scraps and reams of paper I’ve gone through to come up with a name.  My husband got so sick of hearing me start a sentence with “What do you think of…?” that I think he was starting to listen with just one ear.  Maybe.   Finally, it hit me.  shari j. designs.  All lower case.  My paternal grandfather called me Shari J. when I was a little girl.  My parents named their first mahogany hulled boat Shari J.  It was the name I used for everything from Words with Friends to the dating site on which I met my husband.   My eldest son said it was a no brainer.  I had a name!  It was done.

So, two years after that first afternoon of scribbling down names, I finally decided on who I was going to be, and opened up my Etsy shop.  Fast forward a year and I was in the throes of having this .com website built.  We were nearly at the finishing line before going live when I realized I just couldn’t live with the name that had seemed such a good fit a year ago.  I hadn’t realized what a lot of baggage that name was dragging along.  It just wasn’t me.  How could I continue with it?  I could not!  Absolutely would not!

Panic in Needle Park!  What to do, what to do?  It wasn’t like I’d left any stones unturned in the initial search.  Besides which, family, friends and facebook peeps were getting pretty tired of hearing about it.  The ending, needless to say, is pretty anticlimactic.  Silver Echoes.  I’d like to say it came to me in a dream.  It did not.  Although I’d be very hard pressed to say how it did come to mind.  Not taken on Etsy, you say?!  Not already a .com domain?!?  Ohmygod.   OHMYGOD!!!  I thought I had just died and actually ascended in to jewelry heaven.  Hyperbole, I realize, but I was ecstatic.   My ever supportive husband heaved a sigh of relief.  My family and other assorted posse members were so glad that we would be able to talk about something else. Anything else.   And it just seemed to fit.  The right attitude.  The right sound.  And certainly, the right vibe.

So, that tells you a little bit about me, the inception of my shop, and why it came to be called Silver Echoes.

I hope this finds you well, feeling loved, and surrounded by sunshine.

Wishing you an awesome day!